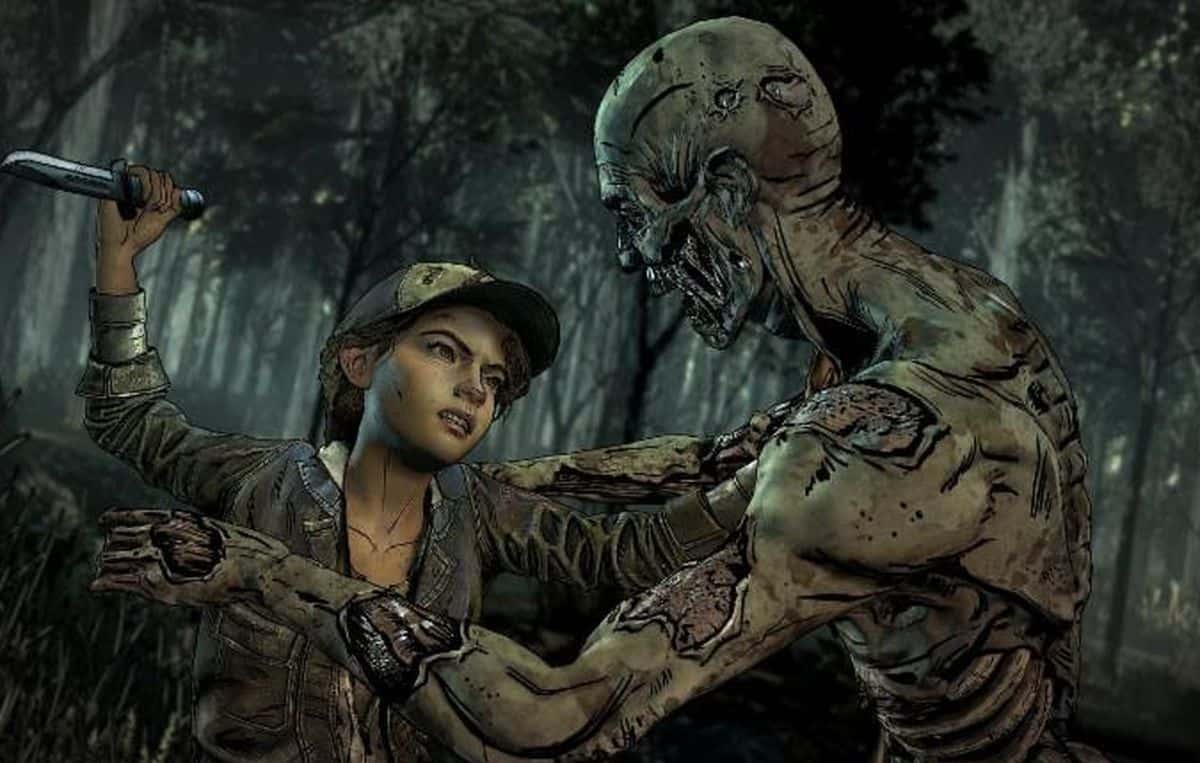 The one genre that is evergreen is Horror! Survival, amidst jump-scares and racing hearts, is fun, especially in video games, as you never know when you might die (Of course, in the game)! Before reading further, beware, as there are Zombies out there (in the article). Yes, we from GameThem, bring you the ten best Zombie games out there, and this time it is not a random list. We have ranked them as well. Let us know if you have played every one of them!

Atom Zombie Smasher is an Indie game developed by Blendo Games for PC in 2011. The goal of the player is to deploy rescue units to rescue citizens across the country from Zombies. The city regions and the events in the game are unique in every playthrough as they are generated by procedural generation. Before starting the mission, the player decides his/her rescue zones and places other military units. Once the mission begins, the player must rescue civilians from hordes of Zombies. If a Zombie touches a civilian before his evacuation, he/she turns in a Zombie as well. So, the player’s goal is to rescue all civilians before the Zombie hordes turn them into Zombies. If the player has evacuated many citizens before nightfall, the region comes under his control, or the Zombies take control of the region. Also, look out for the sudden outbreaks in regions! If you fail to control them, they will spread to other regions!

This hit series from PopCap Games and published by Electronic Arts has been running from 2009 with the latest game Plants vs. Zombies: Garden Warfare 2 releasing in 2016 for PC, PS4, and X-box One. The premise of this third-person shooter is simple and quirky – Play as Zombies and defeat the plants or play as Plants and defeat the Zombies. Several modes let you play co-op with your friends or solo. This is not your regular Zombie game; instead, this is a fun-to-play and easy-to-sleep after playing the game. Various game modes add to the variety of the game, which received many favorable reviews for its gameplay.

The Zombie Army series started in 2015 with the Zombie Army Trilogy as the first game. The Zombie Army is a spin-off of the Sniper Elite series with an original and unique story featuring Adolf Hitler as the Zombie leader with a Zombie Army at his disposal, which he unleashed knowing that he was defeated. The player must defeat the army and Hitler and banish him off to Hell. A sequel to this game, Zombie Army 4: Dead War, released in 2020 for PC, X-box One, and PS4, which again enjoyed moderate success. The story continues in which Hitler comes back from Hell to take back Earth with his Zombie Army, and the player has to stop him and finally kill him to end it all. This game is an alternate take on history and is fun to play!

DayZ is a survival video game developed from the mod of ARMA 2. A standalone successor of the same was also released when the mod became a huge hit. The standalone game is developed and published by Bohemia Interactive for PC, X-box One, and PS4 and was released in 2018. The player is equipped with basic clothes, glow sticks, and four rags and dropped into the map from the fictional country of the Soviet Republic of Chernabus. From then on, the player must survive by scavenging for food, water, and weapons that can be used to kill other players or Zombies. But it is not mandatory to kill other players, and we can interact with them by either voice or message and become an ally as well to scavenge together. Players should also manage diseases and ingest appropriate medicines for the same. This game is perfect for testing yourselves if you will survive a Zombie outbreak!

Dying Light is another survival horror game in the list developed by Techland and published by Warner Bros. Interactive Entertainment for PC, PS4, and X-box One. It was released in 2016 amidst mixed reviews. This first-person survival game is set in the fictional town of Harran, and players play as Kyle Crane, an agent who is airdropped into Harran to retrieve a file. Even though there is a story mode with a great story, the game was lauded for its gameplay which consists of parkour to escape from Zombies while the players scavenge for loot to survive. Another significant aspect of the gameplay is that players can team up with four other players as a co-op to cover the campaigns together. This is fun. Also, there is a mode “Be the Zombie,” where players can take control of a unique Zombie character called “Night Hunter” and jump into other players’ servers to create havoc!

The Call of Duty – Black Ops series starting from the first installment till the latest Call of Duty – Black Ops: Cold War, released in 2020, has a Zombie mode, especially for the Zombie fan in us. Developed by Treyarch and Raven Software, the Call of Duty series is published by Activision. The Zombie mode is a single-player campaign with a unique story set in a multi-verse with recurring characters. Even though Call of Duty is famous for its multi-player campaigns and versus modes, this Zombie mode was the ultimate weapon for Call of Duty in the battle against Counter-Strike. The original story, coupled with the horror aspects and the thrill of the first-person shooter, combined into something magical which other FPS franchises could not replicate.

Days Gone is an action-adventure Zombie game developed by Bend Studio and is a Sony Playstation exclusive. The story is about Deacon St.John, a war veteran struggling to survive in a post-apocalyptic world overrun by “Freakers” to find his long-lost wife, Sarah. Even though most gameplay is similar to “The Last of Us” franchise, the primary differentiator in gameplay is the bike that Deacon uses to traverse across locations on the map. It’s fun to ride a bike instead of a car for a change. The game has one of the most extensive fan-backing campaigns, and people have been petitioning Sony for Days Gone 2. However, Sony’s decision to go ahead with the second part is yet to be decided. This game is also available for PC as part of Sony’s initiatives to bring its exclusive games to Windows.

The X-box exclusive, which was later released for PC, was released in 2013 to positive reviews. State of Decay is an action-adventure survival game developed by Undead Labs. The gameplay was centered around base building, scavenging for resources, and stealthily moving across Zombies to do that. There are no human enemies in the game. While the way we behave with NPCs will let us recruit them, we can also antagonize them by stealing from them. NPCs who are recruited can also be controlled if the relationship with them is good. One non-playable AI character will also accompany you in the story missions. The story of the first part starts with Marcus Campbell, a store clerk in the fictional town of Trumbull Valley, and the story progresses on how he and his group escape Trumbull Valley only to find the infection spreading across other parts of the country. A sequel, State of Decay 2, was released in December 2020 to mixed reviews where the gameplay was pretty similar to the introduction of Co-op play up to 3 players. A sequel to State of Decay 2 has been announced without a release date. This Microsoft exclusive game is a must-play if you are a fan of the Zombie genre.

The Resident Evil series is by far the oldest Zombie series that we have come across. The franchise started with Resident Evil 1 in 1996 for Playstation and is spanning two and a half decades with multiple remakes. The game started in the fictional town of Raccoon City and is now in an unnamed village. The series has had numerous protagonists, and all of them have been fan favorites. The genre “Survival Horror” was first coined and termed for this series! All the Resident Evil games have been third-person shooter horror survivals except for the recent releases of Resident Evil 7 and Resident Evil Village, which have been in first-person. The series, which started as an action-oriented one, slowly turns into a puzzle-solving series in the last two games. There have also been comic books and movies of the Resident Evil series.

1. The Last of Us Series and The Walking Dead – A Telltale Series

The 1st spot for the best Zombie-themed game is tied! The Last of Us is a Sony Playstation exclusive which released in 2013. The players control Joel, who loses his daughter during the early days of Apocalypse and is tasked with taking Ellie, who seems to be the hope of humanity against the infection, to a doctor for reverse-engineering the cure. The trials and tribulations faced by Joel to take her and the bonding between Ellie and Joel form the core of the game. As Joel gets attached to Ellie, he decides to sacrifice humanity’s cure for Ellie, kills the doctor, and escapes with Ellie. He even spares her the truth. The second part of the game, The Last of Us Part II, was released in 2020 with hugely positive reviews. The game featured Ellie as the protagonist who had to take revenge for her foster-father Joel, who was killed by Abby, the doctor whom Joel killed for Ellie. The second part has been an instant hit making the entire franchise praiseworthy! The gameplay for both games is similar, emphasizing scavenging for parts and weapons to craft medicines and other items. The weapons are wielded in a third-person point of view while fighting against the Zombies and other NPCs. Do not miss this series if you are a video-game lover.

The Walking Dead – A Telltale Series is similar to The Last of Us Series in terms of the theme. The core of the gameplay is the relationship between the lead characters and the emotions that arise out of it instead of Zombies. The Walking Dead series started in 2012, and there have been four games in total to it, excluding a spin-off. The series began with a murder convict called Lee getting hit by the Apocalypse as he is taken to jail. He encounters a frail little girl named Clementine, whom he saves and takes along in his journey. The game is about how Lee mentors Clementine, the bond between them, and the lengths he would go to save her. Ultimately, Lee sacrifices his life for Clementine, and in the second part, Clementine takes over as the lead and continues her survival in the world. The third part had a new protagonist with Clementine returning as one of the NPCs to try and find AJ, her foster child from the second part. In the final season, Clementine mentors AJ, and they both try to survive among new friends. Will Clementine ultimately make the sacrifice that Lee made for her to help AJ survive? This epic tale is one filled with emotions that will leave you in tears at parts. The gameplay is a simple point-and-click with quick-time events in the first season and slowly evolves in the new seasons to something between an action-adventure and a point-and-click. The standout feature of the gameplay is that even though the major story arc is doesn’t change, the story changes slightly based on the choices you make, and boy, you have to make some hard choices! The save games from each of the parts or Seasons are carried to the next part, and the choices you made in the first part will impact your story in the Final Season as well! A well-made must-play series not only if you are a Zombie fan but also if you love human emotions.

PS: The Walking Dead – The Telltale Definitive Series released in 2019 for PC, X-box One, and PS4 containing all the four parts/Seasons in one game.